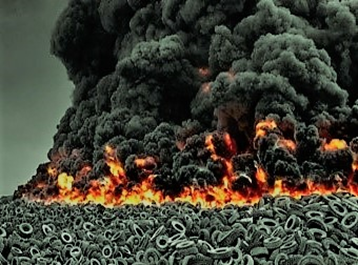 Up in Smoke (and Carbon)

Let’s do a little bit of math.  According to the EPA, each pound of burned tire (known as Tire Derived Fuel or “TDF”) emits about 3.1 pounds of carbon.  With annual volumes of 3 billion pounds, the TDF market in the US currently contributes over 9 billion pounds of carbon dioxide to the atmosphere every year.  9 billion pounds. That’s nearly as much as 1 million gas fueled cars emit annually.

Putting these tires in landfills isn’t really a much better use even though carbon impacts will be smaller. What if instead of burning tires and emitting massive amounts of carbon, we could take these “end-of-life” tires and instead upcycle them?

A better use for waste streams

It turns out that it is possible, with today’s technology, to transform used tires into high performance products and simultaneously reduce the use of virgin rubber.  And companies that are doing this are proving that circular economy business models are better than traditional manufacturing processes and products.  One of the pioneers in this space, Ecore, has been working on processes and products over the past 30 years.  Ecore takes used tires, reprocesses them and turns them into high performance flooring and surfaces.

If you’ve ever been to an Equinox, or Planet Fitness, or Crunch or a gym in a Marriott or Hilton hotel: if you’ve ever been to a playground with a safe rubber surface that you would find at places like Disney: been to an NFL game, a college football game, run on a track at your local school, then chances are you have encountered Ecore products.  But did you know that 90%+ of the floor or track or field or playground or floor you are interacting with is circular?  I will revisit how all of this actually works in future posts, but we know that in the world of performance surfaces circular economy business models can and do outperform more traditional linear economic model.

Although you may know this already, one of the basic ideas of the circular economy is to design waste out of products and break the take-make-waste model that has dominated our economy since the Industrial Revolution.  While there are a few variations on what exactly Circular Economy means, with leaders such as @Bill McDonough, @Ellen MacArthur and firms like @Accenture putting forward similar definitions, Ecore focuses on a simple approach where each aspect of the supply chain and manufacturing process are optimized for circularity.  A simple visual from @Accenture:

Ecore has created processes where they take end-of-life tires out of a system that would send these to incinerators, and instead processes them, extracts other valuable components – most notably steel – and turns the base components into high performance surfaces. Along the way, they create a closed loop system which reuses and captures well over 90% of all materials and waste within their production cycle and are on path to create zero waste facilities.  They also offer a take-back program for customers who want to upcycle the flooring at the end of their use of these floors. The goal is simple – take tires that are bound for incineration, remove them from that waste stream, extract all the valuable materials and transform them into upcycled products.